YES we can do this 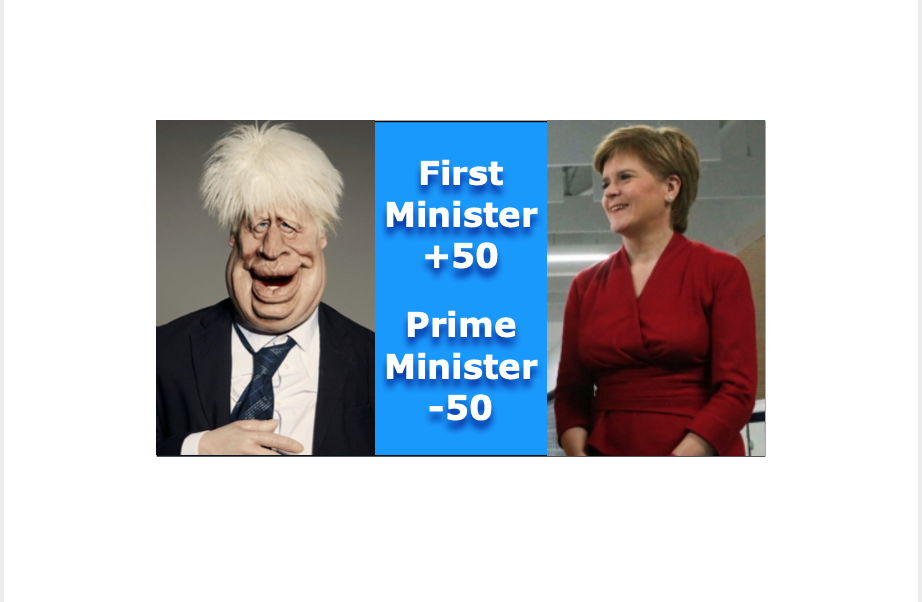 First Minister Nicola Sturgeon’s personal approval rating has surged to +50, comfortably ahead of her political rivals, and it appears likely her party at next year’s Scottish Parliament election will to secure yet another mandate for an independence referendum.

57% of Scotland’s voters are set to back the SNP in May, an increase of 3% from YouGov’s last survey in April. The poll put support for independence at 53%, up 2% from January, when YouGov last posed the question, and just a 1% difference from another polling company’s result in July.

These figures represent the highest levels of support for independence and the SNP ever recorded by YouGov. While Tory UK Prime Minister Boris Johnson has continued to lose ground and fallen to an approval rating of -50, despite his own and his Minister’s recent day trips to Scotland.

Public faith in Nicola and her party is all the more remarkable because polling was conducted during the last week, which had a full onslaught from the English Nationalist media regarding exam grades. 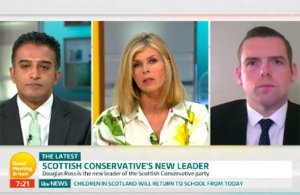 New branch office manager of Scotland’s Tories, Douglas Ross MP, seems to have made no impact except that of someone who will continue to flimflam. He fought his election campaign in 2017 promising to support the WASPI, (Women Against State Pension Inequality), campaign. He then betrayed them by voting against their cause once at Westminster. This week Ross appeared to support Dominic Cummings in a TV interview, having resigned from the Tory UK Government in May because of Dom’s long distance eye test. 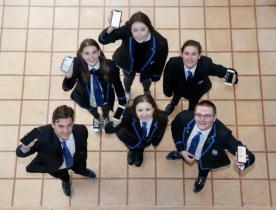 It has been widely reported that 40% of students in England are likely to have their teacher estimated awards downgraded by Ofqual, England’s Office of Qualifications and Examinations Regulation. Only about 25% of awards in Scotland had to be reviewed by the Scottish Qualification Authority, (SQA), and it has initially upgraded 7% of those and downgraded 93%, although these are subject to free appeals. 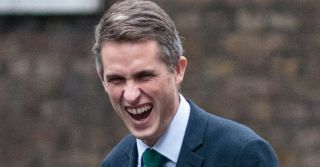 Moran, who is also Lib Dem Education spokesperson at Westminster has written to Gavin Williamson MP, the Tory UK Government Education Secretary. She is insisting that the award of grades substituting for exam results in English academies, colleges and schools be subject to a free appeals process exactly like that of Scotland’s SQA. 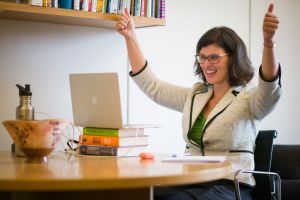 Her letter states that, “While the announcement from  today, that schools can appeal downgrading in certain exceptional circumstances may reassure a limited number of pupils, it does not get to the heart of the matter. Individual pupils who think their grade is an unfair reflection of their academic performance must be given every opportunity to appeal this.”

The Lib Dem leadership hopeful demands that, “Students will have the chance to appeal their grades for free, as well as providing free advice on the appeals process,” as in Scotland.

Willie Rennie, who has criticised the SQA process in Scotland, must be somewhat embarrassed by his potential party leader’s endorsement of it. Unionist double standards are nothing new to the ‘Better Together’ crew. 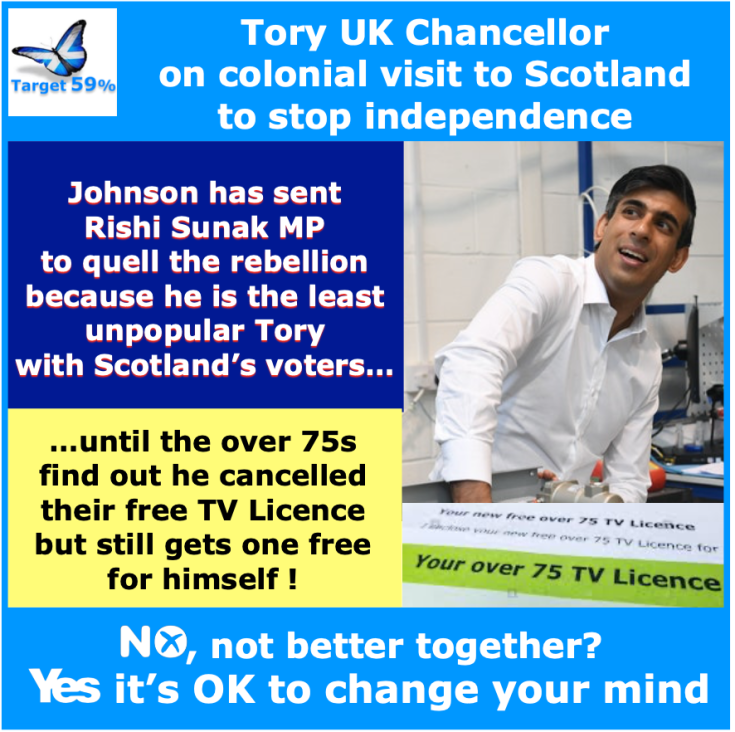 TO LEAD THE TORIES IN SCOTLAND YOU NEED TO BE AN ACCOMPLISHED LIAR: ONLY CANDIDATE SO FAR SHOWS HE ALREADY IS

TORIES HAVE LOST IT, THEIR BRANCH OFFICE MANAGER, THE PLOT AND THE UNION

Boris Johnson and Jackson Carlaw could in the past fortnight have been mistaken for the Chuckle Brothers. Tory efforts at stopping the tide of independence sweeping across Scotland looking very much like ‘to me, to you!’

“No, no, no, you definitely had it last. It wasn’t me. I gave it back to you. It’s not my fault you lost it.” So goes similar discussions we have all had about house keys, wallets and TV remotes, which is now being played out by senior Tories.

Each of them keen that they are not written up in future text books as being the last one to have had the Union before it was lost. Gone for ever, dropped down the drain, left on the roof of the car, slipping down the back of the sofa of history.

Carlaw will attempt not to take his share of the blame, having been handed the pistol of resignation by the Cummings clique in control of the No.10 Downing Street bunker. For the bankrupted car salesman, with the name he has, his time as Tory Branch Office Manager in Scotland was predestined to end in a car crash.

The sound of squealing brakes and the smell of burning rubber were obvious when he tried a hatchet job on the First Minister in Holyrood last Thursday. Carlaw’s leadership wreckage was quickly declared a write-off by the Tory English Nationalists in London. 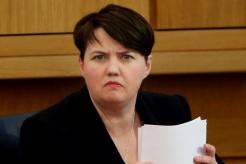 Just six years ago only one opinion poll put ‘Yes’ ahead by a couple of percentage points and panicked Labour, Lib Dem and Tory politicians rushed to Scotland to be greeted by the Star Wars Imperial March. Support for independence is soaring and there have now been several polls this year, consistently with ‘Yes’ in the lead.

With the last poll registering 54% for independence, the Unionists are at a loss what to do to save their precious Union. When the Tory UK Prime Minister visited Orkney, on what seemed more like a state visit by a foreign premier, there was that photo-op with the crabs. Associations with an infestation to be rid of seemed to have eluded his minders.

The same flawed Tory thinking is touting the heir presumptive to become the new Tory Branch Office Manager in Scotland. Having come up with the answer Douglas Ross, part time Tory MP for Moray and football referee running the line to try to appear less of a skiver, we can only wonder at what weird questions had been asked.

Ross waved a red card in the general direction of Dominic Cummings and eventually resigned his Colonial Office for Scotland posting once he found out that it was cricket that was not being played by Johnson’s Svengali. The very same evil genius who let the press know Ross was regarded as ‘Mr Nobody’ when he quit being a Minister now thinks he is going to save the Union, or does Dom have other plans?

There is so much fun to be had with this situation, not only for the SNP and Scottish Greens in Holyrood but for the wider ‘Yes’ movement. Ross is not an MSP, he will almost certainly have to arrive in Holyrood on the Tory list next year and then in that case there is the burden of having or not having a by-election for his Westminster seat.

It is possible to be Tory Branch Office Manager and not be in Holyrood, but the Murphy Dug double act did not work too well for Labour Branch Office. In the meantime until all that is played out Rooth is his understudy in Holyrood, only this time having been made a pantomime Dame losing any credibility she thought she had.

Check, Change, Go is the slogan from the Brexit Radio campaign, more appropriate for those thirteen branch office managers and leaders of England’s political parties that have not survived Nicola Sturgeon or Patrick Harvie.

Obviously using voices in those radio ads that have the same accent as Scottie, the starship engineer in the original Star Trek, to promote leaving the EU without a deal is going to stop Scotland breaking away from the UK.

‘Vote Leave’ was able to ‘Take Back Control’ of the Tory party and hence the UK Government on a particular prospectus. That of getting away from out of touch politicians from another country and unelected bureaucrats dispensing directives from a city hundreds of miles away in a long lasting economic, political and social union.

This is an irony not lost on the independence movement and just to make their lives even easier Scotland’s Tories could not arrange a whisky-tasting in a distillery. They have lost it, their Branch Office Manager, the plot and the Union. 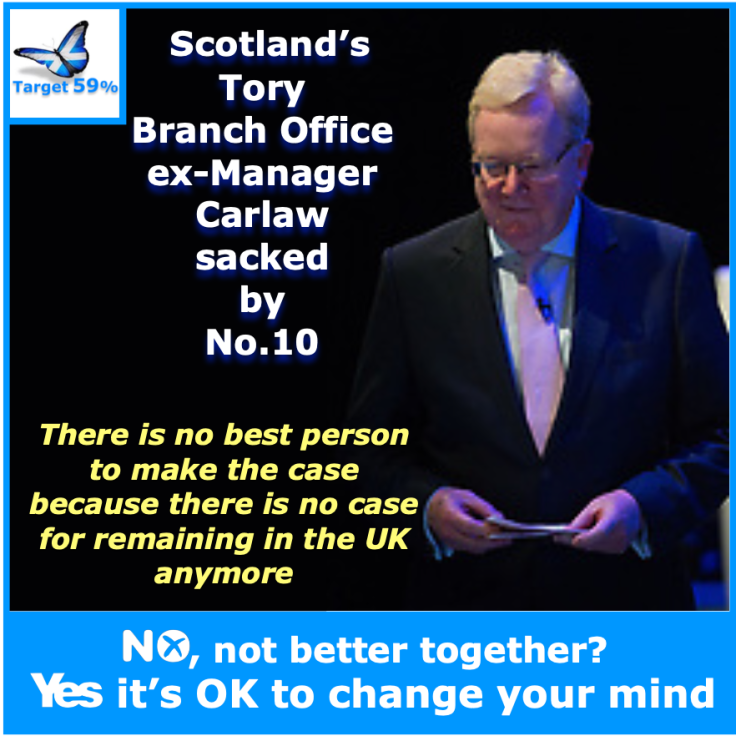 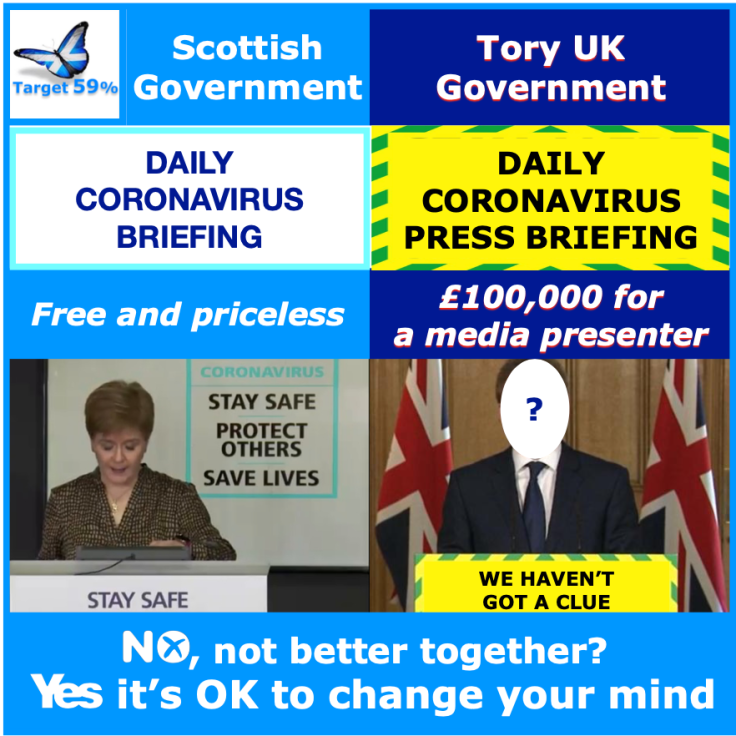 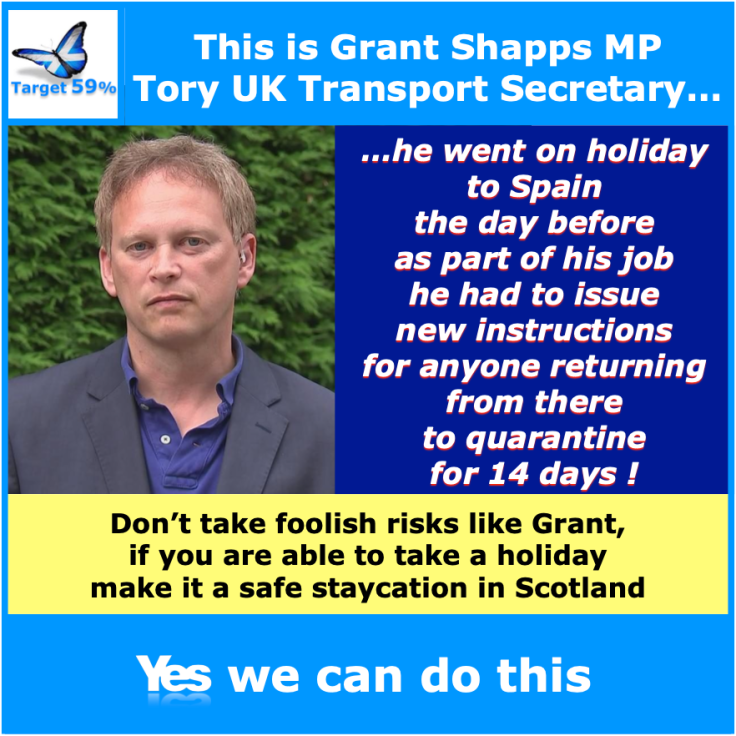